The student winners of the 2017 Demetriades - Tsafka - Kokkalis Prizes have been announced. Manuel Alejandro Monge Osorio received the prize in Biotechnology for his work with Professor Azita Emami which involves developing novel techniques for the miniaturization of implantable medical electronics in two important pillars: localization of medical devices and electrical stimulation. Pinaky Bhattacharyya was the recipient of the prize in Seismo-Engineering, Prediction, and Protection for his work with Professor Jim Beck investigating an information-theoretic approach to the problem of the optimal sensor placement for Bayesian system identification of structures using response time-history data. Bryan M. Hunter, working with Professor Harry Gray, received the prize in Environmentally Benign Renewable Energy Sources for his work on the development and characterization of a nickel-iron layered double hydroxide water oxidation catalyst with the goal of developing a solar-driven device for the synthesis of fuels, with hydrogen production as a target. The winner of the prize in Nanotechnology was Anupama Thubagere Jagadeesh whose research interests are focused on understanding the engineering principles behind designing and synthesizing programmable molecular machines.. Anupama’s graduate advisor was Professor Lulu Qian. The prize in Entrepreneurship was given to Ken Y. Chan who was advised by Professor Viviana Gradinaru. His research interests lie in developing tissue clearing technologies to render whole organs transparent for optical investigation.. 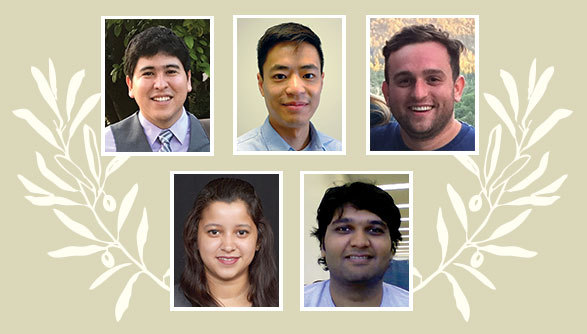